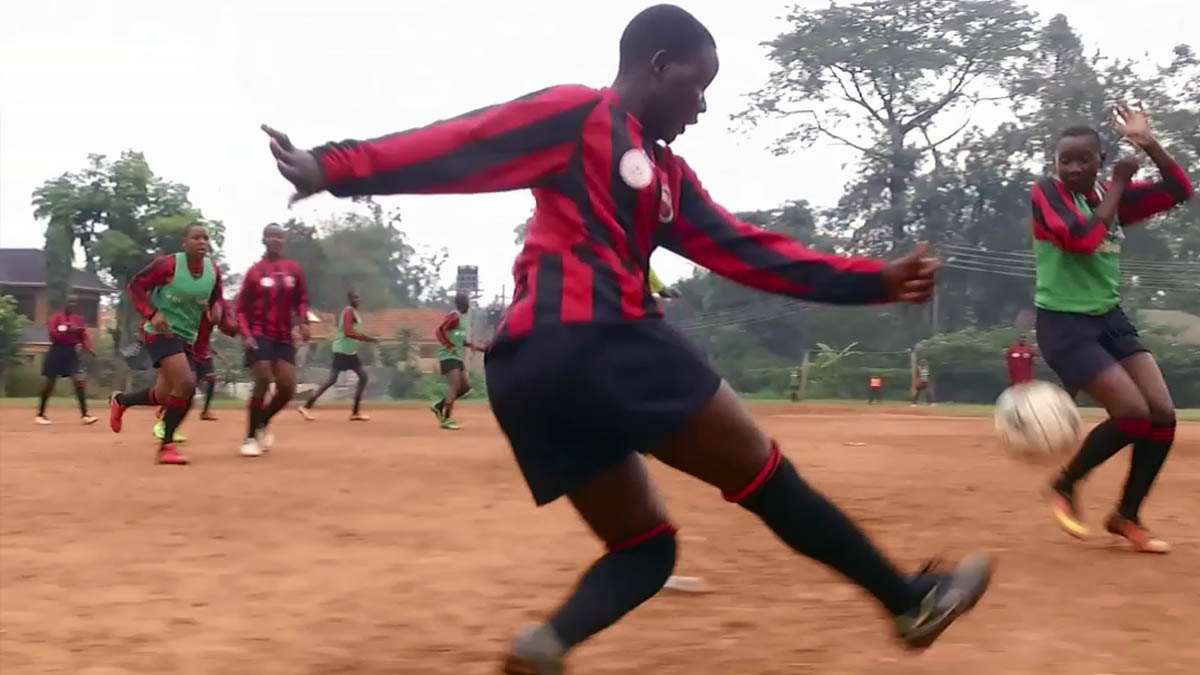 A group of disadvantaged youngsters from Uganda have issued a heartfelt thanks to a junior football club in West Bridgford who generously donated kits and funds to help them start their own team.

West Bridgford Colts made the donation as a show of support for the Girls United scheme being run by UK-based charity Hope for Children.

The initiative helps Ugandan girls form football clubs which create safe environments for them to interact, socialise and also get access to further education.

The girls selected to benefit from the support of Colts and associated charity The Tom Maccabee Memorial Fund are from Namuwongo, a slum settlement on the outskirts of the Ugandan capital, Kampala.

Around 75 girls in total have joined the team and they now train and play matches in Colts colours following the kit donation. The girls also receive weekly training sessions from a professional football coach who has been funded for 12 months with the money raised.

As a show of appreciation for the support from people in Nottingham, the girls created a short film in which they showed off their new football skills for the cameras at one of their weekly training sessions whilst wearing their donated kits. The team also recorded a personal message of thanks which was played back to a visibly moved audience at the West Bridgford club’s AGM last week.

West Bridgford Colts chairman Peter Stansbury said he was proud of the club’s success in helping improve the lives of the girls in Namuwongo.

He said: “It’s great to use the size of our club to support something so worthwhile as Hope for Children. Not only have we been able to raise funds for these vulnerable and disadvantaged children, but we’ve also used the power of football to bring a community together and at the same time help our players and coaches understand just how fortunate we are.

“The club will continue working The Tom Maccabee Memorial Fund to support Hope for Children and help disadvantaged youngsters around the world. “

Rose Walker, from Hope for Children said: “The support of West Bridgford Colts means that every week at least 45 girls who live in Namuwongo get to have fun playing football, eat a nutritious meal, build confidence, self-esteem and gain vital knowledge about keeping themselves safe and healthy.”

Tim Maccabee is the father of Tom Maccabee and helps runs the fund set up in memory of his late son. He said it was pleasing to be working with Tom’s former football club to help make a difference.

He said: “Tom played for West Bridgford Colts throughout his senior school years. It was a natural alliance to work with the club to fundraise in his memory after he was tragically killed in late 2014.

“It’s a really proud moment to see the difference we have been able to make to these girls’ lives, playing football in the same kit that Tom himself played in for all those years. It follows on from the first project we worked on together when we funded a pitch for an orphanage and local community in Nepal.”

West Bridgford Colts are now working with The Tom Maccabee Fund to pay for two more coaches to work with the Ugandan club next year.

You can learn more about the work being carried out by The Tom Maccabee Memorial Fund here: https://www.facebook.com/maccasfund/

Please find the agenda below for the AGM at 8pm on Thursday 15th October 2020. An email with a…

urgent – Save our sports ground

Regatta Way is under threat of development